Neutron monitors are ground-based recorders of cosmic rays. Cosmic rays are  highly energetic charged particles (predominantly protons, together with heavier  nuclei of atoms, but also electrons and gamma rays) originating in the galaxy and traveling through interstellar space. They have to propagate through the interplanetary magnetic field that is frozen into the solar wind, and the Earth’s magnetic field before they arrive at the Earth’s atmosphere. Due to collisions with nuclei of atmospheric atoms, showers of secondary particles are produced. The nuclear active components of the secondaries are detected by a neutron monitor.

The counting rate of a neutron monitor is, therefore, a measure of the intensity of cosmic rays arriving at Earth. Occasionally, the sun also produces cosmic rays in so-called Ground Level Enhancements (GLEs). Since cosmic rays do not arrive isotropically (with the same intensity in all directions), especially during GLEs, an optimal distribution of neutron monitors across the Earth’s surface is required to derive the time-dependent directionality and intensity spectrum of cosmic rays within the energy range of detection on Earth.

Only about 10 of the approximately 40 well-operating neutron monitors are in the Southern Hemisphere. Of these, the Tsumeb, Potchefstroom, Hermanus and SANAE neutron monitors provide a unique latitudinal chain of recorders from near the equator to Antarctica. The operation of these neutron monitors and their data processing, for international use, are part of the research programme of the Centre for Space Research at the Potchefstroom Campus of the North-West University.

Tsumeb – Namibia
(190 12' S, 170 35' E, altitude 1240 m.a.s.l., ambient atmospheric pressure 660 mm Hg)
The 18NM64 neutron monitor operates at a research station that was established by the Max Planck Institue for Aeronomy in 1957 for ionospheric observations during the IGY. Presently, the station is maintained by the Geological Survey of Namibia. The station is situated about 12 kilometers north-west from the town of Tsumeb, in the northern part of Namibia. The photograph of the buildings was taken from one of the high towers of the ionosonde antenna on the site. 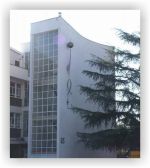 Potchefstroom  - South Africa
(260 41.9' S, 270 05.6' E, altitude 1351 m.a.s.l., ambient atmospheric pressure 652 mm Hg)
The 15 counter IGY-type neutron monitor is situated on the roof of the Physics building of the Potchefstroom Campus of the North-West University. This building houses the Centre for Space Research,  responsible for the processing of the data recorded by this chain of neutron monitors

Hermanus – South Africa
(340 25.5' S, 190 13.5' E, altitude 26 m.a.s.l., ambient atmospheric pressure 760 mm Hg)
Hermanus is a town at sea level close to the southern point of Africa. It is a picturesque seaside resort, famous for whale watching. The neutron monitor is operated by the Hermanus Magnetic Observatory since the International Geophysical Year (IGY), from July, 1957. Currently it consists of 12 NM64 Chalk River neutron counter tubes, and it is the second oldest continuously operating neutron monitor.

SANAE IV – Antarctica, since April 1997 on Vesleskarvet, a small outcrop (nunatak).
(710 40' S, 020 51' W, altitude 856 m.a.s.l., ambient atmospheric pressure 660 mm Hg).
SANAE IV is 170 km inland from the former South African bases, SANAE I, II, and III, which were on the ice shelf at 52 m.a.s.l., ambient atmospheric pressure 987.2 mb. On the previous bases, the 3NM64 neutron monitor was placed on scaffolding that could be elevated to keep it clear from the rising snow level. When the monitor was shifted to Vesleskarvet in 1997, it was increased to a 6NM64, and it is situated on the upper floor of the station building, which is situated on rock and does not suffer from a changing snow environment. A four-counter neutron moderated detector (4NMD)  which is an NM64 neutron monitor without lead producer, also operates since 1974. This detector has a softer yield function than the standard neutron monitor.

The list below gives the name (location) of the station, followed in brackets by the geographic latitude and longitude, the altitude in meters above sea level (m.a.s.l.), the average pressure for pressure-corrected count rates, the barometer coefficient and the vertical cutoff rigidity in GV for the epochs 1980.0 and/or 1990.0*. The type of neutron monitor and the period of operation is given subsequently, followed by the counts per hour for March, 1987. This count rate is used as the normalisation rate of 100 in our monthly averages.